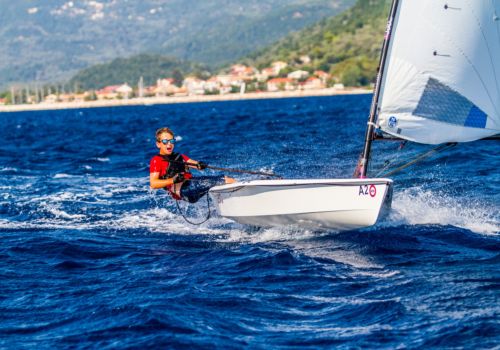 Wildwind youngster wins Under 14 Feva Nationals!
As you probably know, we are we are keen to support the sport of sailing in any way we can. Wildwind runs a programme of sponsorship supporting sailing at all levels, from clubs and individuals to events and regattas. We are also keen to pass on our passion for sailing to the next generation through our Wildwind Kids Club.

This year we have just received some great news from one of our regular clients. Ben Meek (aged 12) has been coming on Wildwind Holidays in Greece with his family since he was very young. Every Summer, Ben makes the most of his two weeks in Vass by attending every training session available.

Ben’s dad Julian and brother Will are also keen dinghy sailors and members of the Salcombe Yacht Club, while his mum Emma comes to Vass every year to enjoy the Healthy Options Fitness Programme.

After last year’s holiday, Ben came back to the UK and was immediately selected for the RS Feva Class National Squad with his sailing partner William! Ben and William went on to win the RYA Regional Junior Championships back in September 2018, and they have just finished competing in the UK Feva Nationals where they secured first place in the U14 category.

Dad Julian has written the following report from the Nationals:

"The first day ended with a fantastic party with live band sponsored by Wildwind holidays. The party was well attended not only by competitors but also by Wildwind staff and clients, the Hobie Centre Team and members of Poole Yacht Club.

The first day's weather conditions were perfect with sunshine and light to medium winds the boys banged hard right, rounding the windward mark first and keeping all but one boat behind them for the rest of the race. In race two and three, the same tactics were implemented; however by this time more of the regular fleet leaders had begun to follow suit, recording a 3rd and 7th ending the day in 4th overall. Day two’s wind was provided by Eric’s** Welsh cousin who arrived mid-morning and stuck around for the first two races making some strong and choppy conditions, Ben and Will dug deep and hiked hard recording two results in the mid-teens. As race three began the wind dropped and begun to swing left, luckily this was spotted by a small minority who made some unbelievable gains Will and Ben rounded the windward mark in second and despite some awesome downwind gains didn’t manage to overhaul the race leaders. At the end of day two the pair were in 8th place and leading junior boat (U14) as the fleets were divided into Gold and Silver the competition suddenly ramped up. On Monday and Tuesday, Eric’s Welsh cousin was back, and he’d been working out with regular gusts of 15-20kts which is great if you are on holiday Vass but not so good if you are one of the lightest crew combinations on a championship racecourse! The boys managed to get their major capsize of the week out of the way on Monday morning and continued to record mostly mid-teen results for the rest of the event. At the end of day four, there were some exhausted sailors who had all completed a "full-on" championship, Ben and Will were delighted to take the junior title by 34 points and are still eligible to compete as juniors for another year!"
Julian Meek

**Eric is the local name from the local wind phenomenon that takes place in Vassiliki in the afternoons.

"My Wildwind holidays have meant that I have had plenty of heavy wind practice, coaching and tactic training, as well as time to practice different race scenarios and learn from the different race instructors that work there.   I have also benefitted from lots of light wind practice in the morning as well as the chance to try lots of different types of boats and just loads of time on the water. The holidays have helped me with my summer sailing fitness every year."
Ben Meek

Wildwind Kids Club
As well as offering the chance for kids like Ben to practice and polish their racing skills, Wildwind Kids Club can also help introduce complete beginners to sailing. Youngsters will get to try their hand in sailing in simple beginner dinghies and Hobie Cats.

Kids who already have some experience in the RYA youth classes will be coached individually, taking into account their ambition and ability. It goes without saying that a keen eye is always on them for maximal safety.

All kids on our sailing courses are comprehensively taught and thoroughly looked after by dedicated members of sailing staff, in morning and afternoon sessions. Not only will we teach them to sail, but we’ll also make sure they have fun learning! While your children are enjoying their time in the Kids Club, you will get the chance to sail or to simply relax and enjoy the leisurely pace of Vassiliki.