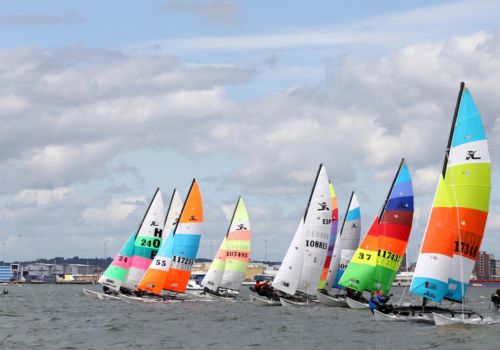 The Hobie 16 UK Nationals returned to Poole Yacht Club on the 25th-27th May, 41 years after the club hosted the very first Hobie 16 Nationals back in 1978. The event was a huge success with perfect twin-trapezing conditions over most of the 3 days. 17 crews attended with some travelling from as far Aberdeen, other talented Hobie sailors joining the regatta from the Royal Channel Islands Yacht Club fleet in Jersey and there were also 5 boats from the local Hobie fleet at Poole Yacht Club.

Due to the success of the regatta and the positive feedback from sailors and spectators alike, The UK Hobie Class Association have committed to host the event again next year at Poole Yacht Club with sponsorship already secured from Wildwind holidays and The Hobie Centre.

The regatta attracted a mix of ages of crew and boats, with some of the older crew and boats scoring some of the top places in races throughout the regatta. Proving that a well maintained and well sailed Hobie 16 of any age can perform in this International one design class.

On the first day of racing the boats launched to a mirror smooth harbour, the scheduled time of 12.00 was put back 30 minutes whilst the sailors waited for the wind to kick in. The wind arrived and then slowly built to a steady South Westerly of about 16 knots over the course of the afternoon. Andrew Boyd and Kim Troll dominated the regatta right from day one securing 1st position in all 3 races on the first day. Lloyd Crisp and Claire Marion held 2nd place after the 1st Day racing followed by Mark Farrow a seasoned Hobie 16 racer who was racing for the first time with his 14 year old son Johnny.

The first day ended with a fantastic party with live band sponsored by Wildwind holidays. The party was well attended not only by competitors but also by Wildwind staff and clients, the Hobie Centre Team and members of Poole Yacht Club.

The following morning the sailors appreciated the 11 am post party start time and got on the water to a good breeze of 18-20 knots with some strong gusts coming off the land that were to catch out a few of the sailors on their approach to the windward mark off the Arne peninsular. During the 4 races there were a few capsizes with crews rushing to right their boats in an attempt to maintain their position. Andrew Boyd and Kim Troll continued to dominate the second day securing 2 more 1st places in the first 2 races and a 4th (their discard) and then a 2nd. Mark and Johnny Farrow ended the 4 races in second place and local Poole sailor Jacobo Miquel with his crew Thomas Clayton crept up into 3rd place.

For all the results and photos as well as the date for next year’s event see the event website.

The Hobie sailors are now turning their attention to forthcoming European Championships in La Rochelle, France from the 17th to the 27th of July.

The Hobie Worlds takes place in Fort Lauderdale, USA from the 1st-16th November, 2019