Wildwind - Where it all started. 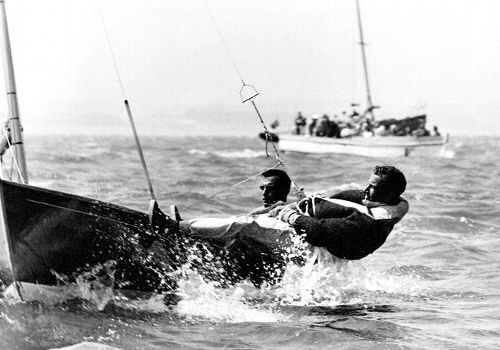 The year is 1986 and Simon Morgan is working in a London for a Health food company, he is 29 years old and bored with life!

Sailing is in Simon’s blood, he is the son of former Olympic medallist Tony Morgan who won a silver medal with Keith Musto in the Flying Dutchman Class in the 1964 Olympics. He has recently acquired a Hobie 16 and every spare moment that he has he uses to drive down to Christchurch in Dorset and go out sailing on as Hobie 16.  What he didn’t realise is that his passion for sailing is about to transform his life forever.

Tony Morgan competing in the Olympics.

He reads about an event called the Hog’s Breath 1000, the event is invitation only and all applicants have to submit their applications to be considered.  With the help of some friends who are part of the Hobie 16 Racing scene (which was very active at the time,) Simon puts together an application and seeks sponsorship from Virgin Atlantic to cover some of the costs.

His application is accepted!

The screening for the event is thorough because the Hog’s Breath is one of the most challenging long - distance events around.  727 miles on a small cat racing day and night (4 days 12 hours 33 minutes and 12 seconds) from Key Biscayne in Miami to Fort Walton Beach.  Inspired by the event Simon decides to take a sabbatical and challenge himself with some further racing events in Europe. His first stop is the Hobie European Championships in Holland where he finishes as the best placed Brit.  Then he travels onwards in his VW Campervan and joins another long - distance race in France from Roscoff to Dinard.

After that, he has no particular plan and just chooses to head to Greece in search of a location he has heard is a very good spot for windsurfing.  After a long drive across Europe he arrives at Vassiliki bay on the Island of Lefkada and pulls his van up in the dusty carpark with a bunch of similar vans occupied by windsurfers from around Europe.  The tip off didn’t disappoint a 26 knot+ cross-shore wind is already blowing.  Simon rigs up the 16, recruits a passing touring rugby player as crew and he is away!

A month later he is still in Vassiliki and he has made the life altering decision to sell his house in London to relocate.  His Dad, despite being a keen sailor thinks that he is mad, but he has sampled the Vassiliki cross-shore and there is no going back!!

Here is the Hobie 16 being sailed in a cross-shore in Vassiliki Bay, you can see why he fell in love!

31 years on and Simon’s Holiday company ‘Wildwind’ is still here in Vassiliki bay offering the largest range of sailing boats of any beach - based sailing company in Europe.  The range of boats is complemented by the fantastic Wildwind Team offering RYA tuition targeted at all levels of sailors from kids to seasoned racers wanting to improve their skills.  Vassiliki with its fantastic sailing conditions and unspoilt Greek charm has captured many of you just as it did Simon all those years ago with many of you choosing to join us year after year for your holidays.