Thanks for joining us in Vassiliki this season 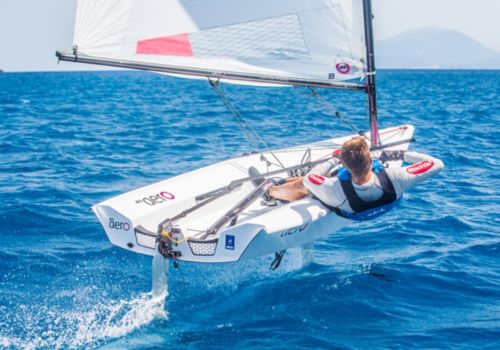 The Wildwind Team would like to say a huge thank you to everyone who joined us in Vassiliki this year and we hope to see you back again before long. It is a continual source of pride and satisfaction for us to see most of our guests return year after year – with at least a couple of clients having holidayed with us for 30 years on the trot!

Joe Bennett, Wildwind’s extraordinary sailor, musician, blogger and manager once again headed up the 2018 instructor team which had some great instructing and racing experience that they were keen to share with the Wildwind guests.

"The season kicked off with three fantastic Laser coaching weeks with the best attendance to date and two special catamaran coaching weeks where the action was as hot as it gets! A massive thank you to our guest instructors and sailing professionals Laura Baldwin, Alastair Nicholl and Wildwind stalwart Ash Lacy (who will sadly be leaving us to head to Plas Menai after 10 great years with us in Vassiliki and in Mauritius)

At the end of June, Wildwind hosted the Vassiliki Watersports Festival which was a huge success with nine countries represented, some great racing and some of the best live music of the season with the David Bowie and Jimi Hendrix Tribute bands on the main stage at the town hall.

During peak season there were fantastic sailing conditions and great times for both young and old sailors alike with our new team really excelling in customer service and giving it the beans on the water (especially in that afternoon cross shore wind!)

September saw the return of the 'Speed Stick' competition where participants were invited to sail with a GPS logging their top speeds. The conditions were perfect with some very strong cross shore wind leading to some very high speeds - the fastest recorded was 24.06 knots on a Hobie 16!

The Ionian Regatta was once again a huge hit with 13 boats from Wildwind participating in the three race series. Dominated by the new Hobie Pacific dream team of instructor Rich and special guest and poet, Paul.

Overall the season was jam packed with magic moments both on and off the water, so many new friendships, team-ups and even the occasional romantic encounter.

We’re all packed up now looking forward to the 2019 season (not before a great season in Mauritius of course!)" Joe Bennett

Joe will be keeping his You Tube Channel devoted to all things Vassiliki updated all through the Winter so if you want to see more from Wildwind 2018 head to his channel https://www.youtube.com/user/joeyenglez.

If you can't wait until next season to get your fix of sailing, then take a look at our Wildwind Adventure Holidays in Mauritius. We are proud to be celebrating our 5th year of Wildwind Mauritius and with 33% of our customers returning more than once to this beautiful location we are looking forward to the next 5 years.
And, as this newsletter goes to print, we have already taken 97% of last year's entire bookings for the period July to June – so, if you are interested in joining us there this 'winter', please do start making your plans sooner rather than later