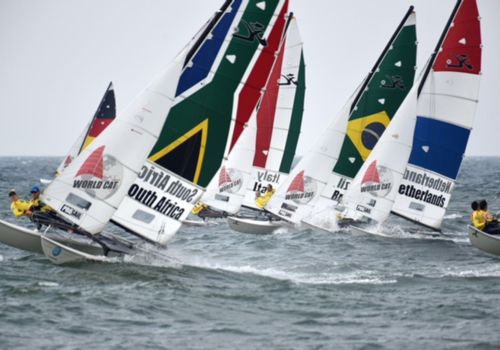 In Germany there is a competitive Hobie sailing event with a difference.    The event is aimed at engaging with spectators in a similar style to the America’s Cup or the Extreme Sailing Series.  Spectators are seated as close as possible to the action in stadium-style seating and the event is commentated throughout.
The Hobie World Cat Regatta is an exclusive event, where only the World’s best Hobie 16 sailors compete. Prosail, (the organising authority for the event,) select teams from around the world based on their ranking within Hobie European and World Championships.  The teams receive a personal invite to the event including their accommodation and food.  During the regatta they get to sail on a Hobie 16 with sails that are branded with their country’s national flag.


You can also apply for a place in this event by writing a short application and adding a recommendation from your national class association. Send your application to info@prosail.de.
This year’s event finished last week, there are 6 days of spectacular sailing in the surf of Sylt in Westerland, Germany with fantastic evening events and live music laid on by the organisers.   The 10 participating teams from all over the world had nearly 100 national and international titles between them.  The Teams from Denmark, Hong Kong, France, South Africa, Germany, Italy, Brazil, the USA, Australia and the Netherlands were the sporting highlight of the Sylt Sailing Week 2018.
The wind and weather in Sylt varied from very light to very strong wind over the course of just the first day.  But even in such demanding conditions, the 10 invited teams set the bar extremely high. "Such perfect starts, as we have ever seen here in Westerland," said Jens Hannemann, press spokesman of Prosail " During the final sprint finish, all the teams came to the beach within a minute of each other,."


Despite the changeable and unfamiliar weather conditions, the sailors and audience remained in high-spirits throughout.  The Sailing fans were able to experience the races close up and teams raced to the beach to cheers and applause.

Over the 6 days the wind varied from nothing to very strong wind and sadly the sailors had to stay off the water for 2 of the six days.  This was a hard decision for the organisers to make but the racing team made the best of it, using their free time to explore the local area, tune up their boats and party!

On the last day of the Hobie World Cat Regatta the wind was again at its best and the teams were able to clock up 6 races.  South Africans Blaine and Roxanne Kay Dodds were able to prevail against Jens Goritz and Katrin Wiese-Dohse from Germany and against Antonello Ciabatti and Luisa Mereu from Italy.


Before the last day, the German Team still tied with the South Africans but they could not manage to keep the strong South African Team in check. After 11 races, their lead had grown to 6 points. The Danish team had just won the Eruopean Championships  a few weeks before and arrived at the event with high-hopes but they were not able to beat the strong teams from South Africa, Germany and Italy.

We look forward to next years’ event…