Our German agent Peter Kukla sails across the Atlantic. Here’s his story. 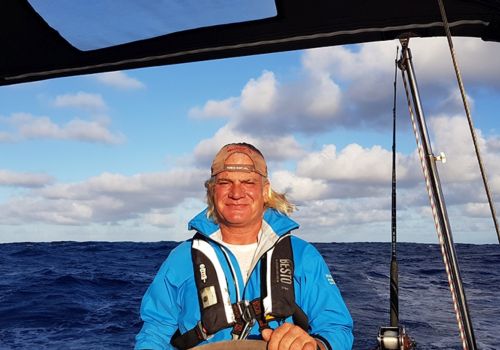 Peter Kukla of Wildwind Germany was introduced to sailing by Wildwind in the early ’90s when one of the Wildwind instructors James Beaver got him hooked on catamaran sailing, since then he has clocked up years of experience sailing in Vass as well as taking part in club and Wildwind races. Once his passion for sailing had developed, he set his sights on sailing across the Atlantic, and at the end of 2018, Peter finally realised his dream.

Peter joined the 2018 Atlantic Rally for Cruisers (ARC) an annual transatlantic sailing event for cruiser yachts which has been running since 1986. The ARC is the largest trans-ocean sailing event in the world and regularly attracts over 200 boats of many different shapes and sizes. The event also includes a sailing competition for racers. The route takes between 8 and 31 days aided by trade winds and covers over 2700 nautical miles from Gran-Canaria to St Lucia.

Peter teamed up with a crew of 9 sailing a Bavaria 51 Cruiser; the first day went well with their boat crossing the start line 3 seconds after the signal sounded. Peter attributes this start line success to plenty of Wildwind racing practice! With a further 19 days of racing ahead, the good start may not make much of a difference, but the nine crew started the race feeling optimistic! Throughout the journey, Peter kept his focus on trimming the boats and tactical and navigation. He found that the skills learned on racing small catamarans were surprisingly useful on the journey.

Even though the boat they were sailing was only three months old, the team still had some technical issues to work through. After three hours of Spinnaker use, the snap mechanism of the boom broke and became unusable. The breakage was quite a blow as the trade winds were pushing them from behind for most of the crossing and put additional pressure on their tactical and navigational skills. Were they going to be able to make the journey with just their regular sails?

While out of sight of land in the middle of the Atlantic Ocean Peter recounted some of the joys; "Dolphins played around the Yacht for hours and the whales were cool to watch, although we did worry about the possibility of hitting them when sailing at night. So many perfect sunsets and rises, clear moons and a view to the stars that was truly breathtaking." Peter.

Out in the middle of the ocean, strong gusts would hit you fast; the crew had to be constantly on the lookout because the powerful squalls could be dangerous if they were not spotted and the boat not prepared for them in advance. All in all, Peter described the experience as intense. It wasn’t just the sailing that made the experience intense; it was also the human side. He found great joy in the absence of phones, "no cellphone available for weeks...priceless and deeply relaxing."

Peter describe crew life as interesting, intense and sometimes socially challenging. It is tough living for an extended period. But Peter loved it and would do it again tomorrow if he could - born to sail!!

The team arrived in St Lucia on 14th of December after 19 days at Sea, well done Peter!