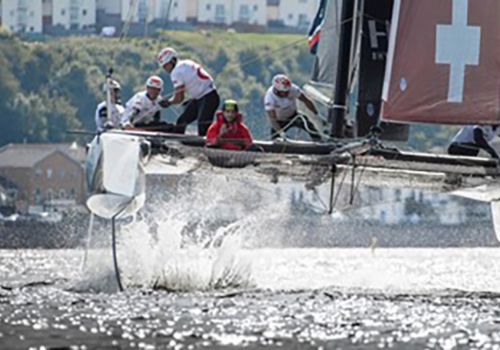 Many of our clients will remember our excellent receptionist of many years, Michelle Ansell, who has now gone on to be involved in promoting and organising the Extreme Sailing Series with ‘Wild’ catamarans around the world.

An appropriate move onward – there aren’t many ‘better’ jobs to do after leaving Wildwind but this would tick the boxes!

Anyway, as a thank you to Wildwind, Michelle has kindly offered a 10% discount to any of our clients and friends who’d like to experience the Extreme series at its next event in Cardiff later this month, just head to the website www.extremesailingseries.com/tickets and enter the discount code at the checkout WILDWIND2018

The Extreme Sailing Series™ is the original Stadium Racing sailing circuit designed for spectators, delivering high-performance action close to shore and putting guests at the heart of the battle. Attracting some of the world’s top sailors, racing the hydro-foiling GC32 catamarans on short courses, the global circuit spans the Middle East, Asia, Europe and the Americas.   The 2018 global tour started in Oman then travelled to Lake Garda in Italy followed by Barcelona, Portugal and the next event is set to be held in Cardiff.

If being a spectator is not close enough to the action for you the Extreme Sailing Series also delivers a unique and bespoke VIP experience, giving guests the opportunity to race on board the high-speed boats in the ‘Guest Sailor’ spot.

To get a flavour of the event check out this short video https://www.youtube.com/watch?v=gpAO-KbY260

More about the boats…


To mark its tenth year in 2016 the Extreme Sailing Series™ introduced a new weapon of choice, the hydro-foiling GC32 catamaran. Smaller, faster than the Extreme 40, and considerably more challenging for the crew, this cutting-edge design gave the Series’ signature Stadium Racing format a complete revamp.
Designed by foil expert Dr Martin Fischer, the GC32 is part of a revolution that has gripped the sport ever since huge AC72 catamarans flew around San Francisco Bay in 2013. Martin Fischer is one of the fathers of modern racing beach cats, but he also has worked in some key big multi projects like Groupama II-III and BOR90.  Many Hobie Cat sailors will have heard his name as he was involved in the design of the Hobie Wildcat.


The magic of this ultra-light, responsive hydro-foiling catamaran lies in its unique J-foils which work much like an airplane wing to lift the hulls out of the water, reducing drag and rapidly increasing speed. This makes for a magnificent spectacle for the crowds watching on shore and a physical balancing act for the crews who have to work hard trimming the sails to keep their boat in the air.
The GC32 is capable of reaching speeds of up to 39 knots, in comparison to its predecessor which peaked at 30. If you want an idea of what that feels like, it is like putting your head out of the window in a car when it is raining at 45mph (72kph).

Absolutely last minute, Extreme Sailing are now at Cowes THIS WEEK 4-11 August and available for foiling experiences. For people already in Cowes Week, this might be a great chance to get onboard. Here’s the website link: https://www.universe.com/events/gc32-sailing-in-cowes-week-tickets-cowes-HX0BFT